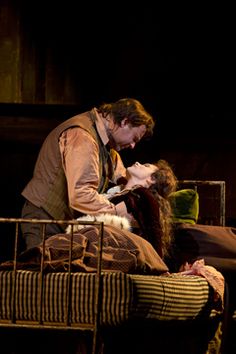 by
31 people viewed this event.
Ticket

THE STORY
Paris, in 1830: four artists are leading a Bohemian life in an unsanitary attic room. One evening, the poet Rodolfo, who has remained on his own to complete an article, meets Mimì his neighbour whose candle has burned out. They fall hopelessly in love. On learning that Mimì suffers from tuberculosis, he prefers to leave her, in the hope that a rich lover can take better care of her! Exhausted, she returns to him to die in his arms.

SMALL DETAILS…
La Bohème is today one of the most popular operas in the world. Based on a novel by Henry Murger, Scènes de la Vie de Bohème, published as a serial in 1851, it addresses the impoverished and uncertain existence of young artists living on the fringes of society. It was in Turin in 1896, with Toscanini conducting, that Puccini encountered his second major public success following Manon Lescaut, with the adaptation of the French tale by his librettists Illica and Giacosa.

The love stories and misfortunes of Mimì, Rodolfo and their friends represented the opportunity for the composer to draw on the spirit of La Scapigliatura, a flourishingly intellectually intense Bohemian way of life that fascinated Italy in the late 19th century. The work reveals the musician’s genius which, thanks to sublime singing, an entranced orchestra and a paroxysmal sense of drama, explores, between frivolity and tragedy, the entire gamut of human emotions. His creed is clear: “I love small details… I can only devote myself to the music of small details when they are genuine, ardent and human and when they go straight to your heart”. That says it all!